Objective:
The gut microbiota influences many aspects of human health. We investigated the magnitude and duration of changes in gut microbiota in response to antibiotics commonly prescribed in UK primary care.

Methods:
We searched MEDLINE, EMBASE and AMED, all years up to May 2020 including all study designs, collecting and analysing data on the effect of antibiotics prescribed for respiratory and urinary tract infections. We followed the Preferred Reporting Items for Systematic Reviews and Meta-Analyses and Cochrane standard methods. Risk of bias was evaluated using the Critical Appraisal Skills Programme. Narrative synthesis was used to report the themes emerging from the data.Main outcome measuresPrimary outcomes were antibiotic-induced changes in the composition and/or diversity of the gut microbiota. Secondary outcome was the time for the microbiota to return to baseline.

Results:
Thirty-one articles with low or unclear risk of bias showed that antibiotics impact the gut microbiota by causing rapid and diminished levels of bacterial diversity and changes in relative abundances. After cessation of treatment, gut bacteria recover, in most individuals, to their baseline state within a few weeks. Some studies suggested longer term effects from 2 to 6months.Considerable heterogeneity in methodology makes the studies prone to biases and other confounding factors. Doxycycline was associated with a marked short-term decrease in Bifidobacterium diversity. Clarithromycin decreased the populations of Enterobacteria, and the anaerobic bacteria Bifidobacterium sp and Lactobacillus sp in numbers and diversity for up to 5 weeks. Phenoxymethylpenicillin, nitrofurantoin and amoxicillin had very little effect on the gut microbiome.

Conclusions:
Despite substantial heterogeneity of the studies and small sample sizes, there is evidence that antibiotics commonly used in primary care influence the composition of the gastrointestinal microbiota. Larger population-based studies are needed to fully understand how antibiotics modulate the microbiota, and to determine if these are associated with (longer term) health consequences. 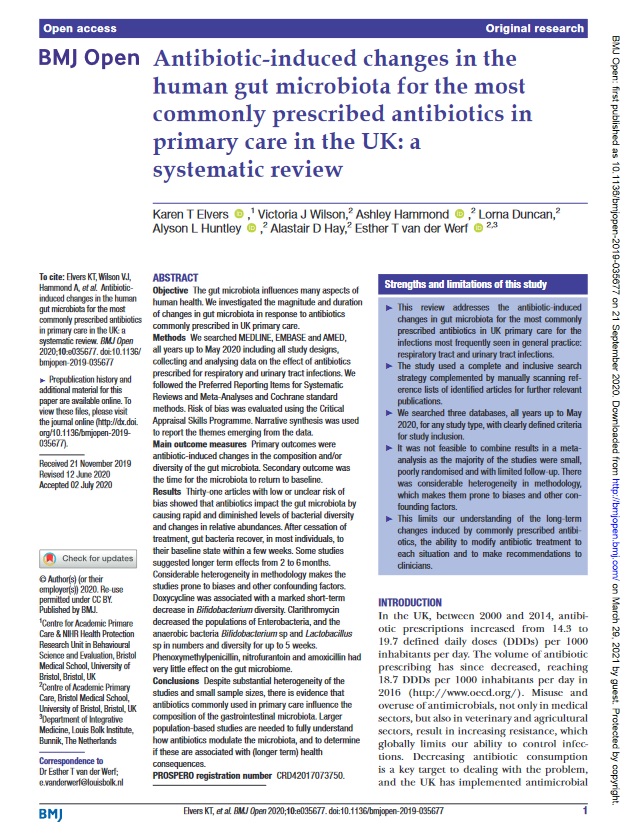