To study the effect of grassland renewal on soil quality and the eco-efficiency of grass production, we compared ten young grasslands (aged 5-10 years grassland without tillage) with ten old grasslands (age >20 year grassland without tillage) as pairs on ten dairy farms on marine clay in the North of the Netherlands. On these 20 grasslands we measured the capacity of a soil to decompose organic matter. This was tested by using the Tea Bag Index (TBI). TBI is determined through the burial and retrievement of green and rooibos tea bags, following by the measurement of mass loss after 90 days. The decomposition rate k and the stabilisation factor S of young grasslands were not significantly different from older grasslands; however, variation between locations was high. A negative correlation was found between age of the grassland and the stabilisation factor S, meaning that decomposition of organic matter in older grassland continues for a longer time and may be an indication of a higher soil biological activity. 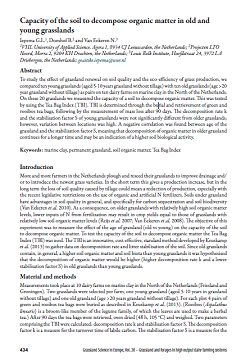