The objective of this study was to investigate the carbon storage potential of reclaimed soils under organic management. Agricultural soils are often mentioned as a potential carbon sink. However, until now the UNFCCC (United Nations Framework Convention on Climate Change) doesn’t issue certified emission reductions (CERs) for carbon sequestration in soils.
"This research focuses on carbon stock development of reclaimed desert soils in Egypt. The research was conducted on two farms owned by Sekem, one of which located 60 km north-east of Cairo, and the other one in the Sinai desert. Five agricultural fields of different ages (1-30 years in use) were selected and compared with the surrounding desert. In every field, representative soil samples were collected from 3 line transects, each consisting of 5 sample points. The samples were taken at three horizons; 0-10 cm, 10-30 cm and 30-50 cm, and tested for differences in physical (soil texture and bulk density), and chemical (acidity, salinity and organic carbon levels) properties.
"The results show that reclaimed desert soils under organic management sequester carbon very rapidly in the first few years after land reclamation, but that this rate decreases after several years, following a logarithmic curve. The increase in soil carbon was first measured in the top soil (0-10 cm) and then in deeper soil layers. The bulk density of the top soil layer decreased at the same time.
"The results show that in 30 years of organic agriculture, the soil carbon stock increased from 3,9 to 28,8-31,8 tons C/ha, a raise of ca 24,9-27,9 t C/ha. On average, the soil stored 0,9 t C/ha/y in these 30 years. Thus, an atmospheric CO2 reduction of 3,2 tons CO2-equivalents per ha and year had taken place.
"It is rather unlikely that soil carbon sequestration will be approved by the UNFCCC on the short term as a methodology to mitigate the greenhouse effect. This is due to the fact that the permanency of carbon sequestration in soils is questionable. Issuing carbon credits to farmers in for instance underdeveloped dry land regions that sequester carbon in the soil could function as an incentive for sustainable farming. High organic matter levels reduce irrigation water needs and improve soil fertility, which may be helpful for combating droughts and food scarcity. 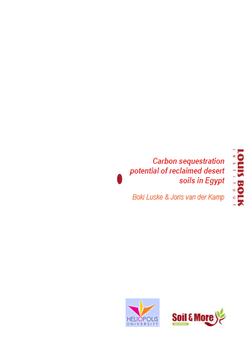