The last two years we measured the amounts of leaf litter and ascospore production per unit of leaf litter area in 7 organic pear orchards throughout the Netherlands. In one of the orchards, adapted managements strategies were implemented two years ago, being grass/clover that is grown as ground cover on the tree-strip, and organic cattle-manure that replaces chicken manure pellets, in order to stimulate the earthworm population and change the palatability of the leaf litter. First results indicate large differences between orchards in percentage of ground covered by dead leaves at the time of major ascospore infections, but also in number of ascospores per cm 2 leaf litter and in resulting potential ascospore dose. We used these data, together with weather data (temperature, rainfall), in a simple multivariate analysis to gain insight in the dynamics of the system. In 2010, 85 % of the variation in pear scab was explained with a model with rainfall during summer and the amount of asco sores per unit of leaf area. In 2011, 81 % of the variation was explained by a model with the amounts of ascospores per unit leaf area and the potential ascospore dose. In the adapted management experiment we measured no changes in leaf litter in the treatments yet. We discuss that our first results show that, to a limited degree, leaf litter was indeed important for the scab epidemic in 2011, whereas in 2010 the high amount of rainfall in the second part of the growing season must have led to a high conidial infection pressure. Surprisingly, in both years ascospore number per unit leaf area was of more importance than leaf litter area or potential ascospore dose. This raises questions on for example the correlation with branch-lesions that we did not measure, and whether the number of ascospores per unit of leaf litter is a direct or an indirect factor that steers the scab incidence in the orchards. 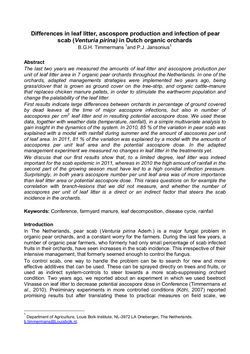