Early spring grazing may stimulate grass growth in spring by increasing grass root exudation, which enhances mineralization. The objective of this study was to investigate the net effect of early spring grazing on spring grass production. Therefore, we conducted two field experiments on production grasslands. Simulated early spring grazing negatively affected the yield of the first cut: compared to ungrazed plots on sandy soil an a tendency on clay soil, dry matter yield of early-plots was reduced by 20% (sand, P=0.009) and 12% (clay, 0.062), respectively. These differences were partly compensated in later cuts. Despite the negative effect on grass yield of the first cut, early grazing positively affected the crude protein (CP) content of the grass in the first cut on sandy soil, but only in the plots that had not been fertilized with CAN. The stimulating effect of early spring grazing on soil nutrient mineralization appears to be too small to compensate for the negative effects of early grazing on grass leaf area and photosynthesis capacity. 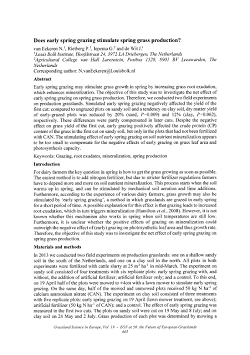