Organic greenhouses may cope with high loads of soil-borne pathogens: not only root knot nematodes, but also various kinds of plant-pathogenic fungi. In a field situation in an organic greenhouse, 3 treatments were tested for their effectiveness to suppress root-knot nematodes compared to control plots. The treatments consisted of (1) Sarepta mustard, (2) Sarepta mustard covered with a plastic sheet for 8 days, (3) Ricasa: a mixture of Ricinus communis, Capsicum annuum and formic acid. After the field treatments were carried out, soil was sampled and tested in a bioassay for suppressiveness against Fusarium oxysporum f.s. linii. The field treatments had a significant effect on soil suppressiveness against Fusarium. Soil of fields treated with Ricasa were less susceptible to Fusarium than soils treated with Sarepta mustard. Most susceptible to Fusarium were the untreated control plots, and plots that were treated with Sarepta mustard and covered with plastic. Soil sampled for the suppressiveness bioassay was also analysed for microflora, protozoa and nematode community. Data were analysed by multilinear regression, to compare the different levels of suppressiveness with the presence of soil biota. Higher levels of suppressiveness after field treatments correlated positively with nematodes from colonizer-persister class 2. Lower suppressiveness correlated with higher numbers of plant-pathogenic nematodes, particularly Meloidogyne, higher maturity indices and higher numbers of flagellates. 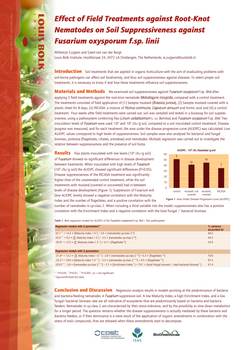