It is frequently hypothesised that high soil fungal/bacterial ratios are indicative for more sustainable agricultural systems. Increased F/BF/B ratios have been reported in extensively managed grasslands. To determine the shifts in fungal/bacterial biomass ratio as influenced by grassland management and to find relations with nitrogen leaching potential, we sampled a two-year-old field experiment at an organic experimental farm in the eastern part of The Netherlands. The effect of crop (grass and grass-clover), N application rate (0, 40, 80, View the MathML source120kgNha-1) and manure type (no manure, farm yard manure and slurry) on the F/BF/B ratio within three growing seasons was tested, as well as relations with soil and crop characteristics, nitrate leaching and partial N balance. Biomass of fungi and bacteria was calculated after direct counts using epifluorescence microscopy. Fungal and bacterial biomass and the F/BF/B ratio were higher in grass than in grass-clover. The F/BF/B ratio decreased with increasing N application rate and multiple regression analysis revealed a negative relationship with pH. Bacterial activity (measured as incorporation of [3H]thymidine and [14C]leucine into bacterial DNA and proteins) showed the exact opposite: an increase with N application rate and pH. Leaching increased with N application rate and was higher in grass-clover than in grass. Partial N balance was more positive at a higher N application rate and showed an inverse relationship with fungal biomass and F/BF/B ratio. We conclude that the fungal/bacterial biomass ratio quickly responded to changes in management. Grasslands with higher N input showed lower F/BF/B ratios. Grass-clover had a smaller fungal biomass and higher N leaching than grass. In general, a higher fungal biomass indicated a lower nitrogen leaching and a more negative partial N balance (or smaller N surplus), but more observations are needed to confirm the relationship between F/BF/B ratio and sustainability. 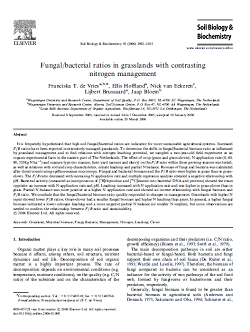