Although grasses have dense rooting systems, nutrient uptake and productivity can be increased, and N-leaching reduced, if rooting is further improved. The variation in root mass of 16 varieties of Lolium perenne was studied under field conditions in two experiments on sandy soil in The Netherlands.The chosen varieties differed in genetic and aboveground characteristics such as ploidy, productivity and grass cover. Root dry matter (RDM) was measured in the 0–8, 8–16 and 16–24 cm soil layers. In summary, we found that RDM of perennial ryegrass differed significantly between arieties under field conditions. These differences were not linked to grass yield, which indicates that it is possible to select perennial ryegrass varieties that combine high aboveground productivity with high RDM. In the first experiment, which was managed by cutting, diploid varieties had higher RDM than tetraploid varieties. Grand mean RDM in the second experiment, which was managed by cutting as well as grazing, was lower than in the first experiment. In this experiment, total RDM was not influenced by ploidy but by grass cover type: high grass cover types had higher RDM. Differences in management between the two experiments possibly explain the differences in RDM and in the influence of chosen characteristics on RDM. Considering challenges in the areas of climate change, water availability, pollution and soil degradation, grass varieties with improved root systems could significantly contribute to a more efficient use of nutrients and water, erosion control, soil improvement and carbon sequestration. 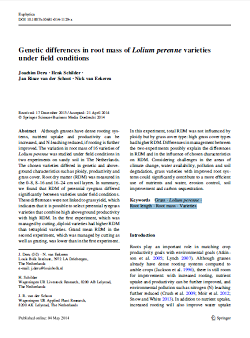