From 2007–2008, data on animal health and welfare and farm management during rearing and laying periods were collected from 49 flocks of organic laying hens in the Netherlands. Our aim was to investigate how organic egg farms performed in terms of animal health and welfare and which farm factors affected this performance. The flocks in our study were kept on farms with 34 to 25,000 hens (average 9,300 hens). Seventy-one percent of the flocks consisted of ‘silver hybrids’: white hens that lay brown eggs. Fifty-five percent of the flocks were kept in floor-based housing and 45% of the flocks in aviaries. No relation was found between the amount of time spent outdoors during the laying period and mortality at 60 weeks. Flocks that used their outdoor run more intensively had better feather scores. In 40% of the flocks there was mortality caused by predators. The average feed intake was 129 g/day at 30 weeks and 133 g/day at 60 weeks of age. The average percentage of mislaid eggs decreased from three at 30 weeks to two at 60 weeks. The average mortality was 7.8% at 60 weeks. Twenty-five percent of the flocks were not treated for worms in their first 50 weeks. Flubenol© was applied to the flocks that were treated. Ten percent of the flocks followed Flubenol© instructions for use and were wormed five or more times. The other 65% percent were treated irregularly between one and four times. Sixty-eight percent of the flocks showed little or no feather damage, 24% showed moderate damage and 8% showed severe damage. The feather score was better if the hens used the free-range area more intensely, the laying percentage at 60 weeks was higher, and if they were allowed to go outside sooner after arrival on the laying farm. In 69% of the flocks, hens had peck wounds in the vent area: on average this was 18% of the hens. Keel bone deformations were found in all flocks, on average in 21% of the birds. In 78% of the flocks, an average of 13% of the hens had foot-sole wounds, mostly a small crust. Combs were darker in flocks that used the range area more intensively. More fearful flocks had lighter combs. We conclude that organic farms are potentially more animal friendly than other poultry systems based on the animal welfare benefits of the free range areas. However, we also observed mortality rates, internal parasites, keel bone deformities, and foot sole lesions on organic farms that were comparable to or worse than in other husbandry systems. It is unclear whether these ‘remaining’ problems can be attributed to housing or if they are the result of keeping high productive genotypes in an artificial environment. Organic farms use the same high productive genotypes as other husbandry systems. 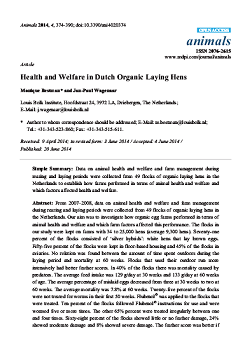