The introduction of N2-fixing white clover (Trifolium repens) in grassland is a management measure that may contribute to sustainable grassland systems by making them less dependent on inorganic fertilizers. However, little is known about the impact of this measure on soil biota and ecosystem services. We investigated earthworms, nematodes, bacteria and fungi in an experiment in which white clover-only and a mixture of grass and white clover without fertilization were compared with grass-only with and without fertilization. In comparison with grass-only, white clover-only had a lower total root biomass and a lower C/Nratio in the above- and below-ground plant biomass. These plant characteristics resulted in a lower bacterial biomass, a lower fungal biomass, a higher proportion of bacterivorous nematode dauerlarvae, a lesser proportion of herbivorous nematodes and a greater abundance of earthworms in clover-only. The quantity and quality (C/N-ratio) of the above- and below-ground plant biomass in the mixture of grass and white clover (20–30% clover in the DM) was comparable with grass fertilized with 150 kg N ha1 of inorganic fertilizer. Differences between these treatments might show specific clover effects in the grass–clover mixture on soil biota other than quantity and C/N-ratio of the litter. However, the only differences were a higher proportion of bacterivorous nematode dauerlarvae and a different nematode community composition in grass–clover. The soil structure in white clover-only showed a higher proportion of angular blocky elements, a lower penetration resistance, a higher number of earthworm burrows, a higher potential  Nmineralization and respiration than the soil in grass-only. This suggests that clover stimulates the
"ecosystem services of water infiltration and supply of nutrients, but is less conducive to soil structure
"maintenance. The grass–clovermixture differed from grass-only in a higher respiration and from cloveronly in a higher percentage of soil crumbs. We suggest that when clover is introduced in grassland to reduce the reliance on inorganic fertilizer, the mixture of grass and clover maintains the positive impact of grass roots on soil structure and increases the supply of nutrients via the soil food web. Thus, a grass– clover mixture combines the agronomic benefits of the two plant types. 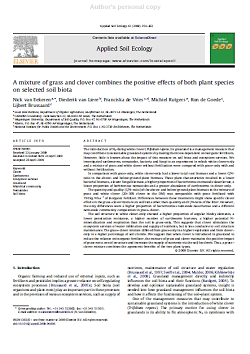