In this paper we focus on the functional role of trees for livestock as fodder in silvopastoral systems, available for (dairy) cows within or around pastures. Farmers often report that cows browse from trees, however, little is known about the nutritional value of different tree species. Therefore, the objective of this study was to assess the effect of soil type and season on the nutritional potential of leaves from Fraxinus excelsior, Alnus glutinosa and Salix viminalis. Leaf samples were collected at 10 sites in the Netherlands on clay and on sandy soils in June, July and September and were analysed for digestibility, crude protein, macro and micro element concentrations. We conclude that the nutritional value of tree leaves differs between the studied tree species. Regarding the seasonal variation, we found a main effect of sampling period on the crude protein, calcium, phosphorus, copper and selenium concentration of leaves. No main effect of soil type was found on the nutritional value of leaves. Significant interactions were found for species × sampling period (digestibility, calcium, sulphur) and species × soil (digestibility, calcium). For the zinc and selenium concentration in tree leaves, a significant species × soil × sampling period interaction was found. We conclude that trees can play a role for supplying protein, and macro and micro elements to livestock, but that it depends on which tree species is used. 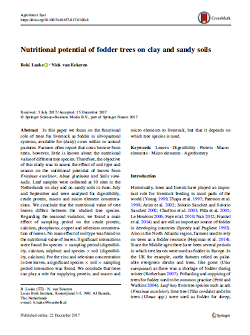