Paludiculture, the cultivation of crops on rewetted peatlands, is often proposed as a viable climate change mitigation option that reduces greenhouse gas emissions (GHGe), while simultaneously providing novel agricultural business options. In West Europe, experiments are ongoing in using the paludicrop cattail (Typha spp.) as feedstock for insulation panel material. Here, we use a Dutch case study to investigate the environmental potential and economic viability of shifting the use of peat soils from grassland (for dairy production) to Typha paludiculture (for cultivation and insulation panel production). Using a life cycle assessment and cost-benefit analysis, we compared the global warming potential (GWP), yearly revenues and calculated Net Present Value (NPV) of 1 ha Dutch peat soil used either for dairy production or for Typha paludiculture. We estimated that changing to Typha paludiculture leads to a GWP reduction of ~32% (16.4 t CO2-eq ha−1), mainly because of lower emissions from peat decomposition as a result of land-use management (−21.6 t CO2-eq ha−1). If biogenic carbon storage is excluded, the avoided impact of conventional insulation material is insufficient to compensate the impact of cultivating and processing Typha (9.7 t CO2-eq ha−1); however, this changes if biogenic carbon storage is included (following PAS2050 guidelines). Typha paludiculture is currently not competitive with dairy production,mainly due to high cultivation costs and low revenues, which are both uncertain, and will likely improve as the system develops. Its NPV is negative, mainly due to high investment costs. This can be improved by introducing carbon credits, with carbon prices for Typha paludiculture (30 years) comparable to EU-ETS prices.

In conclusion, Dutch Typha paludiculture has a significant climate change mitigation potential by reducing emissions from deep drained peatlands. Nevertheless, attention is needed to increase its economic viability as this is a key aspect of the system change 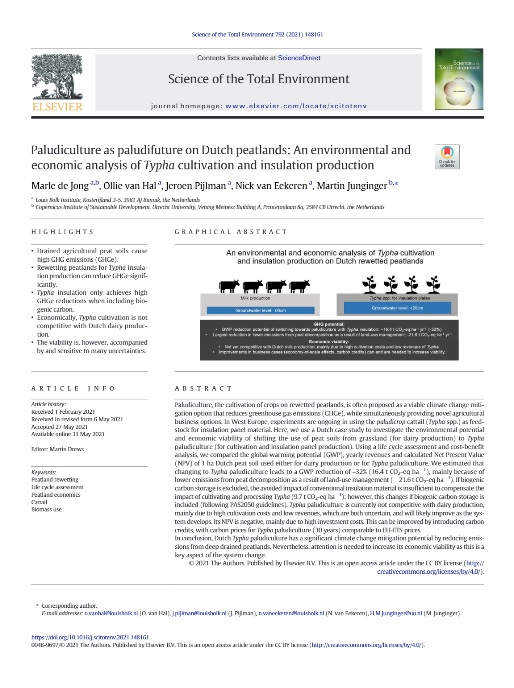