Objectives: To compare the effectiveness of yoga added to standard care (SC) versus SC only, in women with breast cancer during chemotherapy.

Interventions: Women were randomized either to a program based on Dru Yoga, once a week yoga sessions for 12 weeks (N=47), or SC only (N=36). 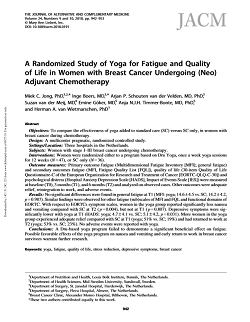