Dairy farmers have increased interest in multiyear red clover–ryegrass ley pasture swards because of their high productivity and protein concentration but the adoption of such mixtures has been restricted because of poor persistency of many red clover cultivars currently used. We aimed (i) to assess dry-matter yield (DMY), persistence and nutritive value of four Mattenklee and four Ackerklee cultivars and (ii) to investigate the underlying plant morphological traits. We conducted a 4-year field experiment with red clover–ryegrass mixtures, in combination with a short-term pot experiment in which the red clover cultivars were grown both in monoculture and in mixture with Lolium perenne L. In the field, Mattenklees showed higher production (on average 42% higher) and clover content (on average 34% higher) in the third and fourth year of production compared to Ackerklees. In the fourth year, Mattenklees had slightly lower digestibility and lower protein concentration compared to Ackerklees cultivars; however, the digestible DMY and the protein yield were higher for Mattenklees. Both persistence and nutritive value of the different red clover cultivars were closely correlated with plant morphological traits. For stem length, there was close correlation (r > .77) between the results from the pot experiment and the field experiment, suggesting that stem length may be an important trait for plant breeding. 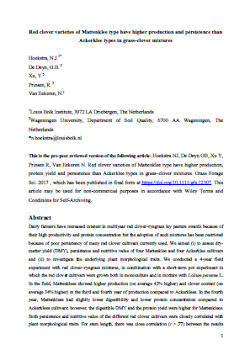