Composting has been acknowledged as an emission reduction methodology by the UNFCCC. The emission reduction reached by a composting project is determined by comparing the composting scenario with the applicable baseline scenario. The objective of this study was on the one hand to clarify the emission reduction methodology of a composting facility in Egypt and on the other hand to extend this methodology with an example to illustrate the effect of compost use on greenhouse gas emissions. In this study, the emissions in a scenario where compost originating from a compost facility near Alexandria is used on a citrus farm in Egypt, were compared with a hypothetical baseline scenario where organic waste is not recycled and chemical fertilizer is used on the farm. The results show that the composting scenario causes significant lower emissions than the baseline scenario. This is mainly due to the avoidance of methane emissions from organic waste dumping, but also emissions due to chemical fertilizer production are avoided. The third reason for lower emission in the composting scenario is soil carbon sequestration. The composting scenario on the other hand also causes extra emissions due the transportation of biomass and fuel use for windrow turning. Although not showed in this study, it must be mentioned that compost has other beneficial effects, like improving soil fertility, improving the buffering capacity and reducing the risk for pathogens. 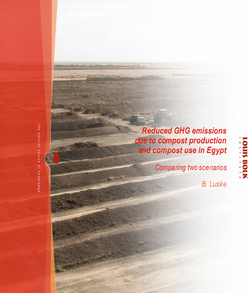