Settings/Location: The study was organized in general and private homeopathic practices in the Netherlands and Sweden and in an outpatient university clinic in Germany.

Subjects: Women diagnosed as having PMS/PMDD, based on prospective daily rating by the daily record of severity of problems (DRSP) during a period of 2 months, were included and randomized.

Interventions: Women were to receive UC + HT or UC for 4 months. Homeopathic medicine selection was according to a previously tested prognostic questionnaire and electronic algorithm. Usual care was as provided by the women's general practitioner according to their preferences.

Outcome measures: Before and after treatment, the women completed diaries (DRSP), the measure yourself concerns and well-being, and other questionnaires. Intention-to-treat (ITT) and per protocol (PP) analyses were performed.

Results: In Germany, the study could not proceed because of legal limitations. In Sweden, recruitment proved extremely difficult. In the Netherlands and Sweden, 60 women were randomized (UC + HT: 28; UC: 32), data of 47/46 women were analyzed (ITT/PP). After 4 months, relative mean change of DRSP scores in the UC + HT group was significantly better than in the UC group (p = 0.03).

Conclusions: With respect to recruitment and different legal status, it does not seem feasible to perform a larger, international, pragmatic randomized trial on (semi-)individualized homeopathy for PMS/PMDD. Since the added value of HT compared with UC was demonstrated by significant differences in symptom score changes, further studies are warranted. 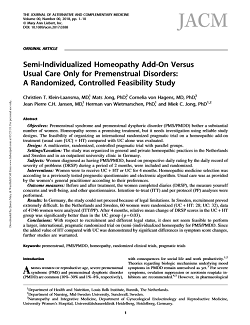