We studied the effect of five fertilizers (including two adjusted manure slurries) and an untreated control on soil biota and explored the effect on the ecosystem services they provided. Our results suggest that the available N (NO3− and NH4+) in the soil plays a central role in the effect of fertilizers on nematodes and microorganisms. Microorganisms are affected directly through nutrient availability and indirectly through grass root mass. Nematodes are affected indirectly through microbial biomass and grass root mass. A lower amount of available N in the treatment with inorganic fertilizer was linked to a higher root mass and a higher abundance and proportion of herbivorous nematodes. A higher amount of available N in the organic fertilizer treatments resulted in a twofold higher bacterial activity (measured as bacterial growth rate, viz. thymidine incorporation), a higher proportion of bacterivorous nematodes, a 30% higher potential N mineralization (aerobic incubation), and 25–50% more potentially mineralizable N (anaerobic incubation). Compared to inorganic fertilizer, organic fertilization increased the C total, the N total, the activity of decomposers, and the supply of nutrients via the soil food web. Within the group of organic fertilizers, there was no significant difference in C total, abundances of soil biota, and the potential N mineralization rate. There were no indications that farmyard manure or the adjusted manure slurries provided the ecosystem service “supply of nutrients” better than normal manure slurry. Normal manure slurry provided the highest bacterial activity and the highest amount of mineralizable N and it was the only fertilizer resulting in a positive trend in grass yield over the years 2000–2005. The number of earthworm burrows was higher in the treatments with organic fertilizers compared to the one with the inorganic fertilizer, which suggests that organic fertilizers stimulate the ecosystem service of water regulation more than inorganic fertilizer. The trend towards higher epigeic earthworm numbers with application of farmyard manure and one of the adjusted manure slurries, combined with the negative relation between epigeic earthworms and bulk density and a significantly lower penetration resistance in the same fertilizer types, is preliminary evidence that these two organic fertilizer types contribute more to the service of soil structure maintenance than inorganic fertilizer. 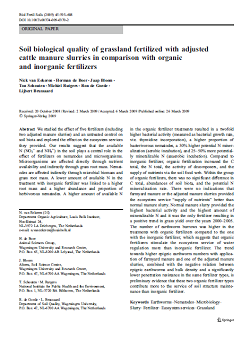