Accurate estimates of the quantity and rate of soil nitrogen supply (SNS) are essential to increase soil and farm N use efficiencies, in particular for soils high in organic matter. The objective of this work was to enhance the empirical understanding of the SNS of dairy grasslands on peat soils, using soil properties and weather variables. Data were collected from studies on herbage N uptake carried out between 1992 and 2017 in the western peat district of the Netherlands. For the period between March to mid October, SNS was estimated from the sum of mean growing season daily temperatures, soil organic matter (SOM) and applied calcium ammonium nitrate (CAN) N with a residual standard error of 25–27 kg ha−1. Each °C growing season temperature sum affected SNS by 78–90 g ha−1 and each g SOM per 100 g dry soil affected SNS by 3.6–3.9 kg ha−1, respectively. SNS was equally estimated for conditions with and without CAN fertilisation. Validation with data from independent field trials showed similar impacts of SOM and growing season temperature sum on SNS. The error of prediction of the presented models, however, was still too large for direct on-farm application and led to underestimations for a specific site. Nevertheless, the obtained models allow for an increased understanding of soil and farm N balances. The models can therefore be used for improved temporal and spatial SNS-adapted farming practice advice, which can potentially lead to reduced soil and farm N surpluses. 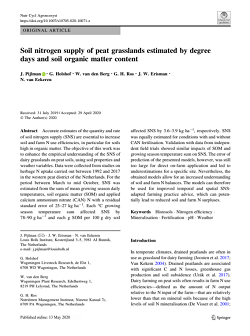