In semi-natural grasslands, plant diversity has shown to increase primary production and reduce weed invasion. To investigate whether such positive effects also apply to low input agricultural grasslands, a commercial grassland was sown with seven non-leguminous grassland mixtures. Diverse mixtures proved less susceptible for invading species three years after sowing. Yields were 11% higher for mixtures with two functional groups of grassland species compared with mixtures with only one functional group. Though overyielding was significant, transgressive overyielding was not apparent, due to the strong effect of one specific functional group: mixtures containing tussock grass had a 14% higher production than mixtures without tussock grass. Tussock grass also had a major effect on botanical composition. However, ground cover by invading species was mainly influenced by the number of functional groups present in the sown mixture. The results suggest that diverse grassland mixtures can improve agricultural production and reduce the susceptibility of sods for invading species, but that the specific composition of mixtures has a strong influence. 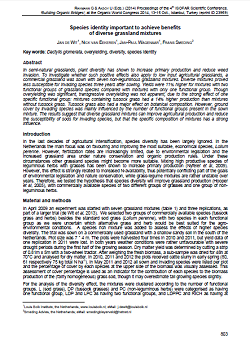