Soil compaction can affect the productivity of permanent grassland. The effectiveness of methods to alleviate compaction depends on compaction level and soil type. We applied sward lifting in compacted grassland on a sandy loam and a heavy clay soil and measured effects on soil characteristics, grass roots, and grass productivity for a period of up to 32 months. Our results show that sward lifting improved soil structure in the heavily compacted sandy loam for at least 31 months. This led to an improvement in water drainage; sward-lifted plots dried up an estimated 10 days earlier than control plots in spring 2017. A likely earlier start of root growth resulted in a higher grass herbage yield (+12% to +22%) and nitrogen (N) uptake (+13% to +22%) in three first growth periods but in only relatively small gains over the entire experimental period (+4% and +8%, respectively). The higher herbage N uptake on sward-lifted plots over the experimental period (+76 kg N ha−1) was offset by a small N loss (−67 kg N ha−1) from the 0–30 cm soil layer. On the heavy clay, sward lifting also improved soil structure and rooting, but effects were smaller and shorter-lived, and herbage yield and N uptake tended to be lower over the entire experimental period (−6% and −5%, respectively). Here, the lower N uptake on sward-lifted plots over the experimental period (−43 kg N ha−1) was accompanied by a large soil N loss (−613 kg N ha−1). Based on all results, we conclude that sward lifting has limited attractiveness to alleviate compaction in water-retaining sandy soils when average penetration resistance in the topsoil is below 2.8 MPa. Sward lifting should be avoided on smectic clay soils altogether, as these soils have a high natural restoration capacity and sward lifting has more negative than positive effects. 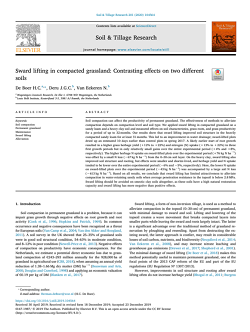