Objective To evaluate among stakeholders the support for the new, dynamic concept of health, as published in 2011: ‘Health as the ability to adapt and to self-manage’, and to elaborate perceived indicators of health in order to make the concept measurable.

Design A mixed methods study: a qualitative first step with interviews and focus groups, followed by a quantitative survey.

Results The new concept was appreciated, as it addresses people as more than their illness and focuses on strengths rather than weaknesses. Caution is needed as the concept requires substantial personal input of which not everyone is capable. The qualitative study identified 556 health indicators, categorised into six dimensions: bodily functions, mental functions and perception, spiritual/existential dimension, quality of life, social and societal participation, and daily functioning, with 32 underlying aspects. The quantitative study showed all stakeholder groups considering bodily functions to represent health, whereas for other dimensions there were significant differences between groups. Patients considered all six dimensions almost equally important, thus preferring a broad concept of health, whereas physicians assessed health more narrowly and biomedically. In the qualitative study, 78% of respondents considered their health indicators to represent the concept. 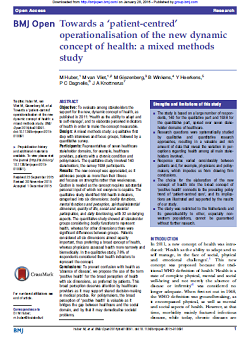